ninjanut said:
It maybe possible. They may have installed an 89 H1 exhaust. This would give the clearance needed.
Click to expand...

That remains to be seen when the next oil change is due.

1990 Kawasaki ZXR750H2
Joined 5 mo ago
·
55 Posts
I changed my tire choice to Michelin Pilot Road 5. A bit more expensive but it’s said to be better even when used than new Pilot Road 4.

1990 Kawasaki ZXR750H2
Joined 5 mo ago
·
55 Posts
In this link is information on ZXR H-models. However, I found strange hint in the suspension section about front fork seals. 
quote:”These days that can easily be improved by a specialist with better oil and springs and revised valving (upgrade to the fork seals from the later J/K model fork seals while you're at it – less prone to leaks/failure).”

Really? From 1991-model ZXR had usd-forks with different measurements, how can the same fork seals work in both types of front forks?

The H1/2 has 43mm RWU and the J 43mm USD fatties; guts are different, but oil seals are the same (92049-1392). You don’t have a choice but to use the superseded J seals as whatever the originals were are history.

1990 Kawasaki ZXR750H2
Joined 5 mo ago
·
55 Posts
Today I got some parts from local motorcycle store.
Front fork oil seals, Italian made set, for 34€.
It has the same specs as the original oil seals so should be ok.

And the postman brought me a small packet from China. It’s a handlebar mounted voltmeter and usb charger, with on/off switch in the back and ready wiring including a connector.
Does anyone know if ZXR has a connector that would match with the connector in the voltmeter wiring and have 12V output? I remember from somewhere that there should be an output for 12V near the battery. Or is it best to do a new wiring from battery to the voltmeter?
It would be nice to have the 12V through the ignition switch. I am thinking also that direct voltage would be ok because of the on/off switch that is included in the voltmeter.
The voltmeter/usb-charger was about 12€ purchased via eBay.

What do you guys suggest would be best?

1990 Kawasaki ZXR750H2
Joined 5 mo ago
·
55 Posts
I have now checked all motorcycle brokers and there isn’t any used coolant reservoirs available.
Same in eBay except that one in US. I think I will fix the old one, but I’m not sure what stuff to use that will stick to the reservoir material. Perhaps any epoxy glue will do? Some elastic fixing compounds are also very good and can stand the heat and coolant. Many possible solutions here. It’s good that riding season is still a month and a half away depending how fast the snow and ice melts from the roads.

Tommikawa said:
I have now checked all motorcycle brokers and there isn’t any used coolant reservoirs available.
Same in eBay except that one in US. I think I will fix the old one, but I’m not sure what stuff to use that will stick to the reservoir material. Perhaps any epoxy glue will do? Some elastic fixing compounds are also very good and can stand the heat and coolant. Many possible solutions here. It’s good that riding season is still a month and a half away depending how fast the snow and ice melts from the roads.
Click to expand...

Will this fit? Not the same year however. 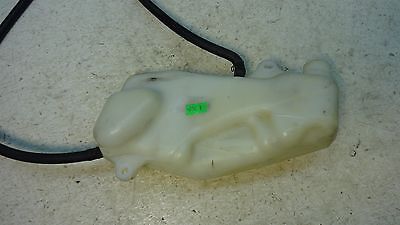 ORIGIN : 1995 Kawasaki ZXR 750 Ninja with 10,776 miles. FOR SALE : coolant tank. Any major flaws in any parts are DISCLOSED to YOU, to the best of our ability. All issues can be worked out.
www.ebay.com

1990 Kawasaki ZXR750H2
Joined 5 mo ago
·
55 Posts
The one from newer model would do if it fits between frame beam and the side fairing. I will try to fix the old reservoir anyway as an experiment and I will try plastic welding. A small gas burner or soldering iron will be needed. But of course I keep looking for replacement part in eBay or at local brokers.

1990 Kawasaki ZXR750H2
Joined 5 mo ago
·
55 Posts
The front forks are back in the frame. I was not happy with the work of the motorcycle shop. They changed the seals ok but had not done a good job rebuilding the fork legs. The rebound adjuster screws only had like 3 positions and should have at least 12. So I took off the adjuster caps and made the basic adjustments so that now the rebound has at least 17 positions. It seems that it depends how you tighten the nut below the adjuster cap. I set the compression preload at 10mm measured with vernier caliper. Final settings needs to be done after some time on the road.
Another little gadget that I added is TPMS. It is aftermarket system but the tyre pressures and temperatures seem to be correct so it is actually useful. It will mess the tyre balancing a bit as the sensors weigh 12 grams but I don’t think it will be a real issue. I have the same type of sensors in my car Lexus RX 400h but the sensors are not so accurate as in my ZXR. I still have to find a good mounting point for the display unit as well as for the usb charger/temp and voltage display unit.
I was thinking of mounting them on the hoover tubes out of the way of the tach and speedo. Also a set of fairing and rear seat cover fasteners are on my shopping list.

ninjanut said:
I am likely going to mount up a P model reservoir to my second H1 rebuild. Have not been able to locate another good one.
Click to expand...

Would it be possible to use any model’s reservoir as they seem to be quite same in size and design? And also maybe a smaller tank hidden in front fairing on left side as there are more free space?

Joined Dec 20, 2011
·
2,463 Posts
You can use any reservoir. Just a matter of finding a sturdy mount to hold it. Race bikes mount them up front usually.

ninjanut said:
You can use any reservoir. Just a matter of finding a sturdy mount to hold it. Race bikes mount them up front usually.
Click to expand...

You are right about that and I will look for a small reservoir tank to mount it somewhere behind the front fairing section. Maybe some 125 bike has suitable size tank. The weather is not usually very hot in Finland and the reservoir never becomes full anyway. I poured out the remaining coolant and it hardly would have filled a beer can.

Joined Dec 20, 2011
·
2,463 Posts
With regards to your your fork set up. A lot of shops don’t follow the Kawasaki manual for setting up the fork caps. The rebound adjuster needs to be set up properly before install or you will not have the range of adjustments. Glad you figured it out as this can create a safety problem.
21 - 40 of 51 Posts
Join the discussion
Continue with Facebook
Continue with Google
or sign up with email
About this Discussion
50 Replies
6 Participants
Last post:
Tommikawa 5 d ago
Kawasaki Ninja ZX Forum
A forum community dedicated to Kawasaki Ninja ZX owners and enthusiasts. Come join the discussion about performance, racing, modifications, troubleshooting, maintenance, and more!
Full Forum Listing
Explore Our Forums
ZX-6R Forum General Discussion ZX-7R Forum ZX-14 Forum Mechanical & Technical
Recommended Communities